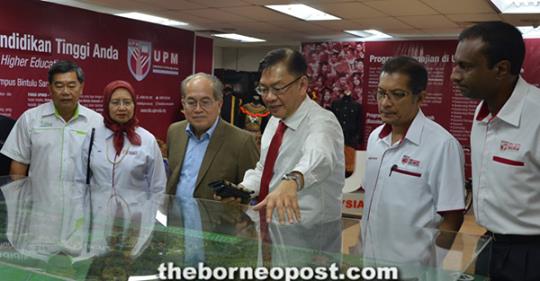 BINTULU: Universiti Putra Malaysia (UPM) campus here is urged to find ways and the best model to develop Sarawak’s agricultural sector, which includes livestock and dairy to turn it into a net exporter of food products.

“We are now the net exporter of agriculture products, mainly palm oil  but we are the net importer of food products to the tune of RM3.6 billion last year,” said Uggah who is also Minister of Modernisation of Agriculture, Native Land and Regional Development during a working visit to UPM campus here yesterday.

“The chief minister has asked us to reverse the trend so that we will become a net exporter of food products by 2030. It is a tall order but it is not an impossible task.

“Sarawak has vast land –  about 2 million hectares – which can be developed for agriculture particularly in food industry,” he said.

He thus hoped UPM could play a role in helping the Sarawak government to achieve the goal as UPM has the experts, facilities and technologies.

He singled out the livestock industry, which Sarawak could venture seriously into by closely working with UPM to emulate the success of Sabah in the same industry.

He added that Sarawak had the capacity to succeed but the biggest problem is Sarawak’s small population of less that three million.

Nevertheless, the government, he added was now going into planting and rehabilitating durian orchards by working together with an anchor farm from Johor which has 30 years’ experience in planting durians.

“We have started to work on the rehabilitation of durian orchards and to develop indigenous durian species. Hopefully, in five years’ time, we can have our very own Sarawak durians that is more popular than Musang King,” he said.

Uggah and his delegation were earlier briefed  by UPM director Prof Dr Bujang Kim Huat on areas that they could  contribute to the academics and economic development of Sarawak.