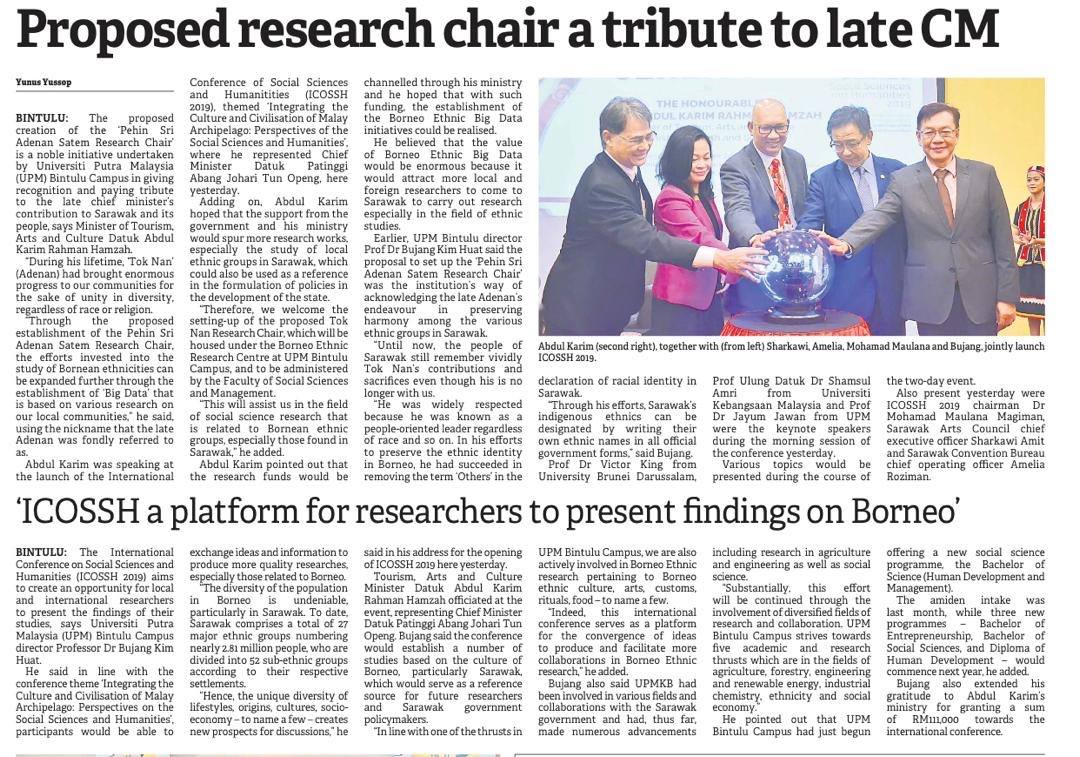 “During his lifetime, ‘Tok Nan’ (Adenan) had brought enormous progress to our communities for the sake of unity in diversity, regardless of race or religion.

“Through the proposed establishment of the Pehin Sri Adenan Satem Research Chair, the efforts invested into the study of Bornean ethnicities can be expanded further through the establishment of ‘Big Data’ that is based on various research on our local communities,” he said, using the nickname that the late Adenan was fondly referred to as.

Adding on, Abdul Karim hoped that the support from the government and his ministry would spur more research works, especially the study of local ethnic groups in Sarawak, which could also be used as a reference in the formulation of policies in the development of the state.

“Therefore, we welcome the setting-up of the proposed Tok Nan Research Chair, which will be housed under the Borneo Ethnic Research Centre at UPM Bintulu Campus, and to be administered by the Faculty of Social Sciences and Management.

“This will assist us in the field of social science research that is related to Bornean ethnic groups, especially those found in Sarawak,” he added.

Abdul Karim pointed out that the research funds would be channelled through his ministry and he hoped that with such funding, the establishment of the Borneo Ethnic Big Data initiatives could be realised.

He believed that the value of Borneo Ethnic Big Data would be enormous because it would attract more local and foreign researchers to come to Sarawak to carry out research especially in the field of ethnic
studies.

“Until now, the people of Sarawak still remember vividly Tok Nan’s contributions and sacrifices even though his is no longer with us.

“He was widely respected because he was known as a people-oriented leader regardless of race and so on. In his efforts to preserve the ethnic identity in Borneo, he had succeeded in removing the term ‘Others’ in the declaration of racial identity in Sarawak.

“Through his efforts, Sarawak’s indigenous ethnics can be designated by writing their own ethnic names in all official government forms,” said Bujang.

Various topics would be presented during the course of the two-day event.